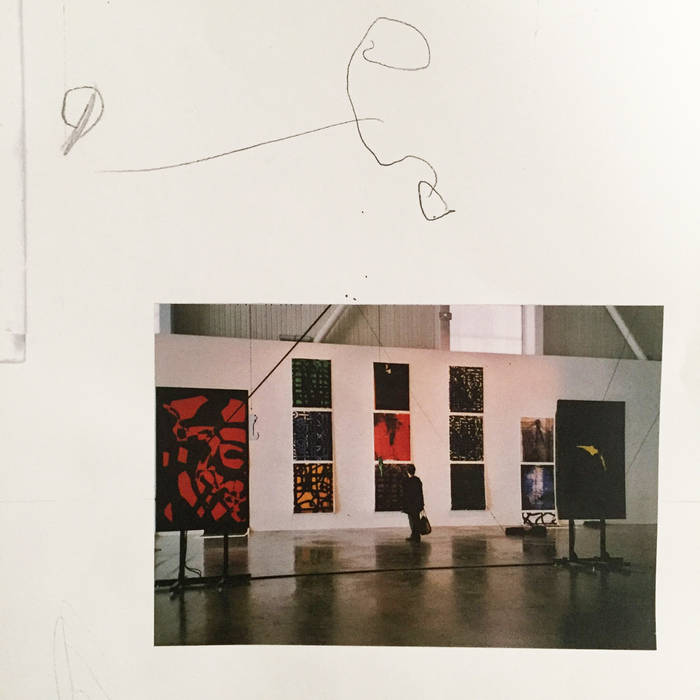 recordings repeat on both sides*

each of the four track is representative of one specific technique.

-the first one is actually just a playback with a tape loop passing trough two recorders with some very small insert of real time recording and speeding up / slowing down variations. for this piece i used a nagra iv-sj and an akai gx260d (it can record 4 tracks over a 1/4 inch tape). the original texture prerecorded on the tape is realized recording a sample of the water on a piece of tape with a very high gain and a second piece of tape layering the one that touch the heads. what happens is that the "regular" recording is very very distorted and harsh (the tape was nearly destroyed). on the second layer there's this plot. the piece is recorded on a maxell 15-120 LH super metallo (0.5 mil polyester). the tape that was touching the heads is a scotch (1 mil polyester).

-the second piece is realized with a collage of the wasted pieces of tape used for the fist piece. i had to record again the sound on a second tape because the collage was to fragile to be reproduced at this speed (15"/s). i used a basf ferro LH. what you listen, actually, is the sound of the tape itself that crawls on the body of the machine (is running very fast) with a very close stereo microphone as well as the sound impressed on the tape (at the very end of the piece the microphone signal fade out and you can listen to the analog "glitch" as it is, alone). in this track the tape is played by the nagra iv-sj, which is actually my main instrument.

-the third and the fourth pieces are realized recording a sample with a Sony WM-D6C, abusing the dolby noise reduction system (B-type and C-Type). to slow down the playback i used a yamaha mt 100 (just for the recording). the third track is recorded on a basf chrome extra II c60 (1990). this cassette was given to me by an old girlfriend of mine, angelica d'acierno, back in 2008. originally there was a recording of her babbling that her mother had done with an handy walkman when she was only a few months old.

-in the fourth track i'm using a cassette loop realized from a tdk type I cassette. it was originally a pop record by lucio dalla. i bought it in a flea market.

i bought my nagra recorder in december 2016, by a very kind gentleman who left me for a ridiculous amount, believing that I would make good use of it.

the akai was loaned to me by my mate giulio nocera, who in turn inherited it from an uncle who found him in the attic.
the sony recorder is a gift from my girlfriend federichina, as a graduation present. attila faravelli has put us in touch with a guy who owns several of them, all in excellent condition.

the yamaha was left to me, by usucapione, by my friend, pietro santangelo, back in 2012. this tool was my partner in many adventures.
I bought the tapes from marco fuccio, a guy that lives in the countryside which is a fan of old electronics. he took a mountain of reels from an amateur radio that kept them maniacally. he has been recording radio shows with an old philips for 30 years. I deleted all the contents with a magnet.

giulio bought his revox b77 mkII from him in october 2015. it was an opportunity of great growth for me.