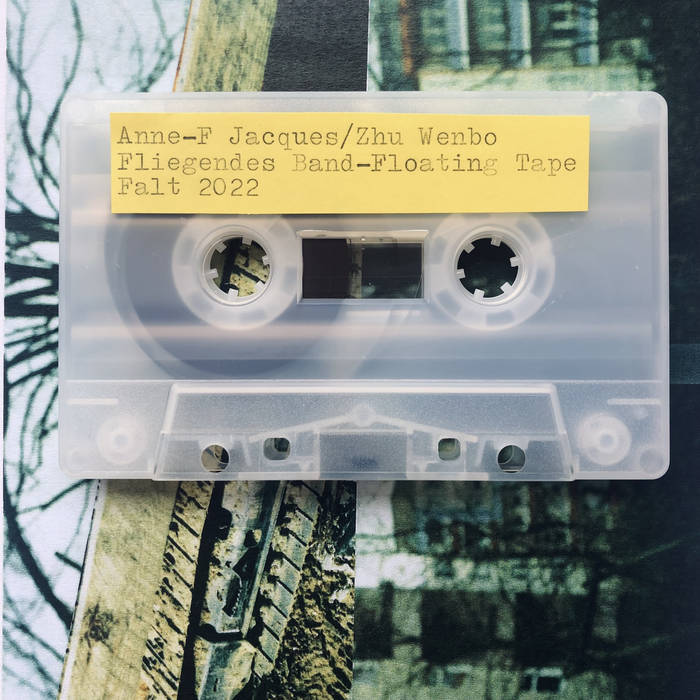 Anne-F Jacques lives in Montreal, Québec. She started running crustacés tapes from 10 years ago, and in last year she stopped it and start a new label named presses précaires. I always love the sound she made, and we traded cassettes many times, shipping always taking too many days. We have not met each other though we have some common friends, and seems it might be difficult in the following a few years.

In the summer of 2021, we started talking about some possible collaborations. A collaboration between two tiny cassette label runners, I thought it could be an interesting idea. Then, I had the idea to invite two other cassette label runners friends to join this game. For each release, two persons contribute sound materials, the third person make some arrangement and mix (only using these materials), and the final product is released on the fourth person’s label. We change roles each time, so each person will act twice as a musician, once as a producer, and once as a publisher. And each person’s work will not be published on their own label.

Anne-F suggested two friends. Pablo Picco is an Argentine musician who works under the name Bardo Todol, and has just started the label Bolinga Everest this year. I always imagine him as a passionate and mysterious father, living with his family in the campo faraway from any civilization (comment form Pablo: I live 50km away from a big city, not that far away from civilization!). And Christian Schiefner aka. Chemiefaserwerk, who has been running Falt for many years, actually we have traded cassettes before. He lives in France, but it seems he is from Berlin. So many people have released their stuff on Falt, including Pablo, Anne-F and myself. It is one of many secret links between us.

We spent days preparing, recording, mixing, asking for more materials, and thinking about a name for this project. One day, some old views came back to my mind.

When I was a teenager, mid-1990s, broken and loose tape could always be found in cities, even in the country. They were ripped on wire, on tree, or hidden in some corners. After some breeze, the black tape was floating in the air. No one had any interest in knowing what was recorded on these tapes. Maybe English teaching or pirated pop songs, or private messages, sound diary, radio programs…

After 2000s, this view became rare and then disappeared. But now I think, “floating tape” can be a good name for our collaborations. Tapes is soft, dirty and inconspicuous, but in another imaginary, these dirty tapes could be transported by wind, floating across the ocean, and reach to another un-met friend in an undetected way.

That is the whole story of “floating tape”. There will be four releases, sharing a same title but in different languages. The cassette you hold in your hand, released by Zoomin’ Night, is the second one. It was performed by Anne-F Jacques and Bardo Todol and mixed by Chemiefaserwerk. In the coming months, another 2 cassettes will come out in some other corners of the world. Hope you enjoy.